“George could you step into my office for a moment please?”

“It’s about this draft of yours. You know, your idea for the next animation film?”

“Well… I don’t know really. I suppose the biggest problem is that you’ve given me a copy of Lady and the Tramp…. Except every instance of the word dog has been scribbled out, and “cat” has been written above it?”

“You’ve also scribbled out any instances of the word ‘woof’ and written ‘meow’ next to it….”

“Don’t you think the audience might find that a bit… too similar?”

“I know, but this isn’t like a ten-minute filler of baby animals frolicking or an older guy laying one on a sedated teenage princess, George. The audience WILL notice if we do the same script but with different animals. What’s the film going to be called?”

“Duchess and the Hobo.”

“No that won’t do. Ok… I’m going to need to see some changes here George before I give this the green light, I’m afraid.”

“Hmmmm…. We could give Duchess some bastard children to start with, throw in a contemporary swing band full of racial stereotypes and then we can chuck in a random side story involving Geese?

I’m probably being slightly unfair here. Although both stories are essentially about a stray male animal making a posh female pet moist, 1969’s ‘The Aristocats’ isn’t just an all cat (and some duck) version of ‘Lady and the Tramp’. However by following in its footsteps to at least some degree may be beneficial, as after watching the first nineteen Disney Animation Studio’s films that are either on its old terrible app or its new not so terrible app (Disney Life and Disney+), ‘Lady and the Tramp’ is so far, the only film I really like. It’s not a complete shocker that I’m one for nineteen so far (there’s half a dozen others that I didn’t mind by the way, I haven’t by any means hated them all) because, as a reminder, I’m a Disney-cynic being given a crash-course on Disney by my Disney-loving wife. And now I’ve just watched ‘The Aristocats’ for the first time, I shall share my experience. As always, that means spoilers and bad language are inevitable… 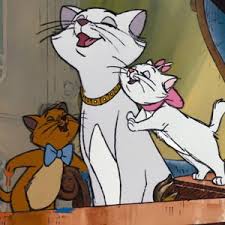 We’re in France. There’s a posh lady, a butler called Edgar, a lawyer and plethora of cats. The cats (Duchess and her three kids) spend the days doing the usual cat things: eating, sleeping, being fussed by their posh lady owner, playing the piano and singing badly during vocal lessons… my god the sound is annoying. But this is Disney, and that’s what normal to Disney. Goddamn Disney… (speaking of which, I started a new ‘predictable things Disney does’ star rating for each film and throwing in an unnecessary song is the films first ⭐, and the kittens frolicking is the second ⭐. And we’re only ten minutes in…) 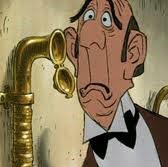 The reason there’s a lawyer present is that the posh lady is making her Will. She’s leaving everything to Edgar. Eventually. The cats get everything first. Now don’t get me wrong, Edgar is a dick as we shall discover. But if you dedicated your life to the servitude of someone which has made you the closest human companion that they have, and then discover that the fortune you were expecting will be delayed for a decade as it will sit in the bank account of some creatures that don’t have any interest or awareness of human wealth (and sing annoyingly to boot), then you may feel rather pissed off, yes? She could have given her wealth straight to him, and he can keep it on the condition that he feeds them daily and gives them a scratch behind the ear. Everyone’s happy. But he is understandably perturbed by this ridiculous turn of events.

That being said, his next move, which involves drugging the cats and driving them out to the middle of nowhere and ditching them does lower the sympathy for him somewhat…

At this point, we meet two very American sounding, old dogs. That are in France for some reason. Also, for ‘some reason’, they really want Edgars bike and sidecar. This nicely sets up them chasing the Butler (and with it, a third ⭐ on the ‘predictable things Disney does’ scale and we’re still only twenty minutes in). At some point the cats fall out of the sidecar into a ditch…

The cats wake up all bewildered. And lost. Fortunately, a streetwise tramp alley cat named Thomas O’Malley appears who can help… O’Malley is voiced by Baloo. Or rather the same actor that also voiced Baloo. I liked Baloo, and his voice very much in ‘The Jungle Book’, so I’m happy he’s returning here and this is a good voice for him to do as this is a very warm and comforting voice for a very likeable character.

O’Malley then hits on Duchess. Here’s an interesting difference between humans and cats: when a tramp tries to get it on with your mother right in front of you, your initial reaction isn’t to say “awwww! How sweet!”. Cats on the other hand…

O’Malley summons a magic carpet to get them to Paris quicker. Which actually involves scaring the crap out of a van driver so he stops, and then they can hop aboard. When the driver is frightened, did anyone else here him yell “FUCK!!!”?

On repeated listen I’ve been disappointed to learn he shouts “SACRÉ BLEU!”.

Back at the cats’ future mansion, rich-posh-lady is very worried about why her cats have suddenly disappeared. Edgar has realised that he’s left his hat at the scene of where he’s abandoned the cats and knows he has to retrieve it to cover his back (and head).

You know when you commit a crime and you foolishly talk about it in front of a horse and mouse? No? And Why? Because you’re not in a Disney film. And hopefully not a criminal. A loud mouthed one at that. Edgar is guilty of this most basic of mistakes and will no doubt pay for this later. Disney’s relentless humanisation of animals does sometimes have benefits.

Meanwhile, the cats have been discovered in the van and leg it. In a display of abysmal parenting worthy of Mowgli’s Mother, Duchess and O’Malley take the kittens on railway track high above a raging river. Slow clap. Unsurprisingly, after a train rushes through, one of the cats ends up in the river. If you’ve ever seen a cat in the bath, you can imagine how well a river goes down…. Fortunately, O’Malley saves her. What a good dude.

The writing team, sensing that all their viewers at this point are probably practically screaming at the screen “THIS FILM NEEDS MORE GEESE IN BONNETS!”, succumb to the will of the people and introduce two geese in bonnets. The Geese are named Abigail and Amelia who are on holiday from England and are completely fucking pointless to the plot. Anyway, the unnecessary geese decide to accompany the cats to Paris. Once they reach Paris, they meet Abigail and Amelia’s drunken Uncle Waldo. I realize at this point that I should have included alcohol and nicotine abuse in my ‘predictable Disney’ star rating system, as it happens with alarming frequency for a family film series, but I figure this trend will quickly die out as we move in the 21st Century. The two geese go off with their drunken uncle, and the random and pointless side-characters have disappeared from the plot as quickly as they had appeared.

Speaking of random and unnecessary side-characters, the two old American dogs have Edgars hat. He eventually retrieves it after many shenanigans, but I really struggled to keep my attention during this segment. 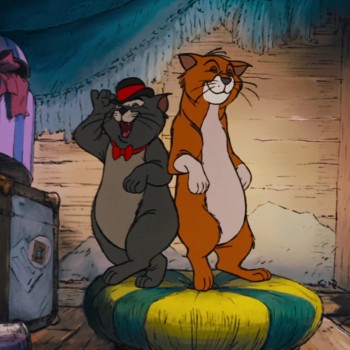 What did keep my attention was the alley cat swing band. O’Malley takes Duchess and the kittens to meet his friends, who are said band. I’ve mentioned previously that I’m not a fan of swing music, but this is really good. The “Everybody Wants To Be A Cat” song has been stuck in my head constantly since its first introduction. Each of the cats are different nationalities, and with this being Disney (or old Disney at least), they racially stereotype each of them within an inch of their lives (so here’s the 4th ⭐). Duchess then starts singing. She starts by singing the line, “If you want to turn me on…” I know they say female cats have high sex drives but that’s really not messing around…

Later, Duchess and O’Malley chat on the roof while the kids spy. Duchess tells O’Malley that although she likes him, she’s loyal to her owner (who happens to be leaving her fortune to her) so they can’t be together. The kids are really disappointed, which is understandable as they want her to settle down with this nice dude and put her whoring days behind her. They probably realized by the first line in her song that she was still “open for business…”

After O’Malley drops Duchess and kittens’ home, Edgar quickly hides them and prepares to box them up and post them off to Timbuktu. Roquefort the mouse alerts O’Malley to what’s happening, and with the assistance of the mouse and horse (who prove themselves to be far more useful to the plot than the geese) he manages to box up Edgar and have him sent off to Timbuktu instead. Having this as a “comeuppance” for a villain is a mixed bag. If you think about it, this could result in a number of different outcomes for the butler.

O’Malley is adopted by rich old lady and written into the will and Edgar is written out of it, which makes me think that he did indeed suffocate, die of thirst or wind up stuck in the Southern Sahara. Which is good. Rich lady sets up a charity that provides shelter for racially stereotypical stray cats and they all live happily ever after. Unless a sunstroke afflicted Edgar reappears in a murderous rage at some stage of course…

To summarise, I didn’t mind this film, actually in places I rather enjoyed it. It was a tad predictable, hence a 4 ⭐ predictability rating, and was rather similar in places to ‘Lady and the Tramp’, but as I mentioned before, at least it was similar to a film that I actually liked. I found the earlier stages of the film tiresome at times, but once the geese buggered off and they reached Paris, I found the film came into its own, and was thoroughly enjoyable. If someone was to show a Disney film to a cynical friend or partner, there are worse films to put on than this one. Based on my history with Disney, that’s akin to high praise…

Whilst watching the film with Ben, I didn’t think that he was enjoying it. So, I’m quite pleased to read that it entertained him more than I thought, which is good because (and here it comes…) “It’s one of my favourites”. I feel like I should make that my catchphrase. My daughter also sites this as one of her favourites (after Mulan, that is).

Our next film is Robin Hood, which I’m predicting a positive response from Ben on. Also, one of my favourites (seriously, though, I will recommend that one to Disney-cynics always).