Shock. Ben hated Bambi. That’s ok, so did I. So let’s move on, shall we. On to Saludos Amigos, another of the earlier films to come out of the WDAS that I hadn’t seen. Honestly, the more that I look at the list of films that we are going to watch, the more of a fraud I feel. There are actually so many that I haven’t seen. Still, Disney lover, not Disney expert, I guess (says the woman with ‘Disneyologist’ in her bio). I love cheese, but it doesn’t mean that I have tried all the cheese. I guess this just means that I need to watch more Disney. Oh well. I’ll be that martyr. For the sake of this blog. You’re welcome!

Saludos Amigos was released on 24th August 1942… in Rio de Janeiro. It didn’t hit US cinemas until 6th February 1943.

The United States Department of State had funded the film in order for Disney to produce a film that solely featured Latin American culture, in an effort to try and severe the ties that some of the Latin American countries were seemingly developing with Nazi Germany. The film is made up of four segments. Two feature Donald Duck and one features Goofy. We are also introduced to the character José Carioca, a green cigar-smoking parrot from Brazil. José is also in the next film that we will be reviewing, The Three Caballeros, so let’s hope Ben like’s him (as I don’t think he’s that keen on Donald Duck!). I will let Ben take you through the segments in detail.

The film was fine. It’s another of Disney’s stabs at a documentary, really. The cartoon segments were fun. I particularly enjoyed Goofy’s and I also learnt a lot about Latin America in the 1940’s. Would I watch it again? Probably not. I just find that there are Disney films that peak my interest more. However, I’d imagine it was enjoyed a lot more by audiences in the 40s & 50s, it just doesn’t translate as well to audiences today.

Considering the previous film was the psychological-mind-fuckery that is ‘Bambi’, it’s quite frankly a miracle that I watched the 1943 follow up “Saludos Amigos”, let alone agree to review it. Fortunately, I am fairly confident that a film that directly translates from Spanish as “greetings friends” should have a fairly narrow scope for deer-snuff. Still, this is Disney, so nothing is beyond the realms of possibility at the moment.

I believe I’m correct when I say that next to no human being has ever watched this film. At least if they have, then certainly no-ones felt the need to shout from the rooftops about it. You always have to be wary of a Disney film when even a die-hard fan like Kerry knows pretty much sod all about it. Saying that, she knew pretty much sod all about The Reluctant Dragon, and that’s probably the only film I’ve reviewed so far that hasn’t left me cranially-molested. So there’s hope. ‘Spell-check’ has just flagged up “cranially-molested” as not being a valid word. I’ve corrected ‘spell-check’ on its mistake.

After the usual annoying intro, we have a map of South America. Apparently, this film is about Disney creative ‘doing research’ here for future ideas. Obviously, this is in no way just a holiday at Disney’s expense. Fair play to the dude who successfully pitched the idea that they need to be paid to go to another glamourous continent in order to decide what to draw next. Knowing Disney, they’ll return three months later with drawings of a cute tapir next to his dead mother and mischievous children being turned into enslaved alpacas.

They start by showing the people who live by 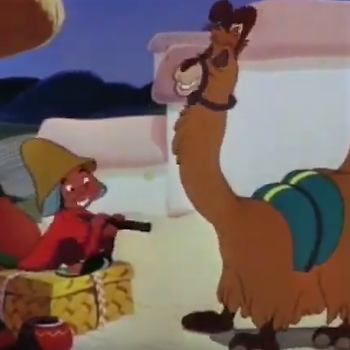 Lake Titicaca and we are immediately bedazzled by the delights of women weaving clothes and detailed explanations of what the fisherman’s boats are made of. Now for me, it’s reasonably interesting (key word being ‘reasonably’), but I suspect a number of young children at this point are running around pretending to be a car or doing a headstand on the sofa whilst humming or whatever else bored kids do. All of this is presented to us alongside commentary from a chap with a ‘Deems Taylor’ (the MC from Fantasia) level of wildness.

After seeing some donkeys (of the non-slaves-that-were-formally-children variety) and llamas we see Donald Duck, who has suddenly appeared on the banks of Titicaca. If you haven’t guessed, we’ve now switched from live film to animation…. Basically we now have five minutes of him getting into all sorts of hijinks involving weaved boats and nearly falling off bridges, etc…

The ‘research trip’ takes them to Chile next. They aren’t allowed to film whilst they are there, so we have no idea what they got up to, but they have kindly made an animation to represent their time in Chile, which naturally is a story about three planes…

Basically some mail needs to be picked up from the other side of the Andes and the Mummy and Daddy plane both can’t make the trip due to various ailments so young Pedro plane has to do it instead. So Pedro sets off on his jour…. hang on. There are Mummy and Daddy planes and they can have children?!!!! The mind boggles at the thought of what happens when a Mummy and Daddy plane love each other very much.  Anyway, Pedro sets off and is immediately scared of heights. Being a plane that’s somewhat problematic. Once he adapts, he flies through the mountains and only gets distracted when he spots a bird and gets rather overexcited, and chases it. You can’t fuck a bird, you silly plane! Apparently you can fuck another plane though (just ask Mummy and Daddy plane who I’m sure have gotten over their illnesses to make the most of your absence). After collecting the mail, the weather turns and there is a huge storm that threatens to knock Pedro out of the sky. We keep seeing a wobbling altímetro (that’s Spanish for altimeter… you’re welcome). Happily, after some scary moments, it doesn’t and he returns to find Mummy plane sleeping whilst Daddy plane lies next her smoking a cigarette and looking pleased with himself. That’s a lie, but at least Disney refrained from killing anything off for once. 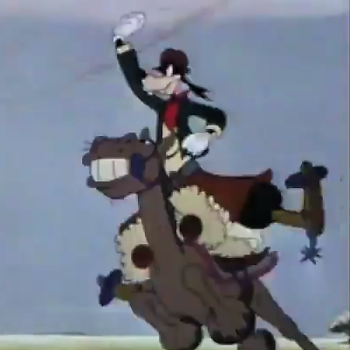 Argentina next and we’re off to the Pampas, where we see local cowboys and old women and meat on barbeques. Personally, as a geography geek who’s fascinated by the world, I find this interesting. But I’m sure many won’t. All this leads to their next animated sketch, which involves the narrator reminding us that America has cowboys as well and so we’re going to Texas to see the antics of Goofy and a horse. Goofy is transported to the Pampas to learn about the differences between American and Argentinian Cowboys. My issue with this whole segment is that we had a “Goofy and his horse” shenanigans in the Reluctant Dragon and a lot of this feels like a bit of a rehash and, frankly, just lazy. You travel eight thousand miles to do a sketch with an almost identical premise to one from just three movies ago. That’s a waste. Goofy learns how to eat bread and meat and dances with a horse, you know, the usual.

And so we move north to Uruguay, oh ok, we’re not stopping at Uruguay then. Apparently Uruguay is not worthy of being drawn. Onto Brazil. We’re being introduced to a new character they’ve created, thanks to their experiences here, by the name of José Carioca, who is a cigar smoking Parrot. Light up kids. After seeing some old people dance and then some younger people dance at Rio carnival, we have a song in Portuguese with a load of hypnotic watercolour animation. I speak a little Portuguese but the only word that I really keep comprehending is

Brasil (that’s Portuguese for Brazil… you’re welcome). The animation depicts various flora and fauna of the Amazon and is superbly done. Donald Duck reappears and I realise I much prefer Looney Tunes. If Bugs Bunny or Roadrunner were to appear here, I would be quite pleased, but when I see Donald Duck, I feel disappointed. José reappears and promises to show Donald Copacabana and it appears they have struck up a repour. They dance to some samba music. The one thing worth drawing attention to here is that Donald gets bladdered from drinking a spirit called cachaça. It is so strong it causes Donald to breathe fire, from which, José lights his cigar. Light up kids, but try to get blind drunk first. After Donald drunkenly dances to some Samba, the film ends.

This is a shorter review than previous films as although, much like most of the previous films, not a lot happens, this film was only forty minutes long. For that, I’m grateful. I’m not sure if this was a good premise for a film or not. It’s certainly original and, at times, it’s really fascinating (at least to me) but ultimately it feels like a placeholder film while the writers try to seek inspiration and wait for the war to end. The sequences with José Carioca and Donald Duck in Lake Titicaca were enjoyable enough but I felt the Goofy segment was a weak point (as discussed earlier). The ‘Pedro the Plane’ cartoon was entertaining (although I was distracted by the thoughts of aviation procreation). I spent the rest of the film distracted by the thoughts of how plane-birth would actually work. Perhaps the cargo deck has a secondary purpose? I digress, overall, I don’t think the film has aged especially well and I certainly think today’s youth will give up on it, but what I will say in praise of this film is my new mantra for life in general, “At least it’s not Bambi”.